A Bastion host is a special purpose computer on a network specifically designed and configured to withstand attacks. The computer generally hosts a single application, for example a proxy server, and all other services are removed or limited to reduce the threat to the computer. It is hardened in this manner primarily due to its location and purpose, which is either on the outside of the firewall or in the DMZ and usually involves access from untrusted networks or computers.
— Wikipedia 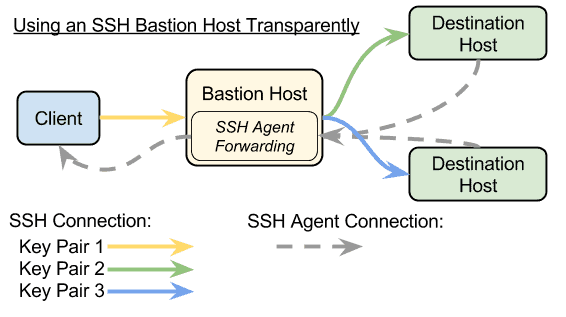 Having a bastion host is a good security practice commonly deployed to strengthen yet simplify security controls of an environment.  However, adding bastion hosts creates complexity in remote execution of scripts or deployment tasks.  Here we will be using a bastion host to serve as a SSH server that we can “hop” through into another machine (real or VM), allowing users to automate remote task execution over SSH. We will be demonstrating how to make that connection transparent and automatic, not only for manual SSH connections but also for programmatic SSH connections such as with GIT or Ansible.

The purpose of using a bastion host for access is clearly a matter of increased security. We won’t be going deeply into the security implications in this article. Instead, we will discuss

1. SSH to the bastion, and beyond

In order to efficiently and (arguably) securely connect to multiple machines from one machine, we’ll be using Public Key Authentication in SSH. There are many references on the internet about how to generate key pairs that can be used for ssh, such as for GitHub, Amazon AWS, Google Compute Engine, and there’s always the ssh-keygen(1) man page.

However you get there, we’ll need to end up with:

With that the basics of public-key authentication are handled: You can ssh into the bastion host without a password. If you have means to directly access to the various machines you intend to connect to through the bastion host (such as through a VPN tunnel or temporarily connecting to the same physical network) then you should be able to ssh into them without an account password as well.

We’ll go with the configuration-file method, since we’re going to build upon that shortly.

With ssh-agent running locally and usable, the keys ssh-add‘ed to it so that they are unlocked, each machine having the correct public key in it’s ~/.ssh/authorized_keys, and ssh agent forwarding enabled for the bastion host, you should be able to ssh through the bastion host and then ssh from there into the destination machines:

2. SSH through the bastion in one command

We can combine the two connection steps into one line, simplifying the process:

3. SSH through the bastion, transparently

We’re going to utilize the ssh ProxyCommand setting applied to the specific host or hosts to tell ssh to setup our connection to the bastion host first, then use that connection to ssh to the final machine. On disconnect this will automatically tear down the intermediate connection as well.

This tells ssh to run the command ssh -A user@bastion.com -W host:port and then talk to the standard in/out of that command as if it’s the remote connection.

That proxy ssh command has several things going on. First, it has the -A that we saw before to turn on ssh agent forwarding. The real magic is the -W host:port, which tells it to redirect the standard in/out to the specified host and port, which was designed specifically for using ssh as a ProxyCommand. And finally, we have the %h and %p tokens that will get replaced in the ProxyCommand call, which allows us to use wildcards and multiple host names in the Host ... line.

With this setup, connecting to destination.com through the bastion host bastion.com is automatic and transparent:

Idempotency. One of the key characteristics of REST, and yet so poorly understood (at least if one surveys the landscape of “RESTful” APIs available floating…

Development teams are always on the lookout for more powerful tools that allow them to build better web applications faster. And it feels like there…

3 thoughts on “Using SSH Through A Bastion Host Transparently”